Since a fair proportion of my thoughts involve the subject of virginity, I figured it’s only fair to share my own first sexual experience. It’s possible I’ve mentioned it before, actually I don’t really remember and can’t be arsed to search through my older posts, so here goes…

In a time, about a decade ago, and a place which was in a different country from where I am now, I was 17 and somebody’s (online) girlfriend. We had known each other (online) for about one-and-a-half years and had met I believe twice before. I’m sorry in advance, it’s been a while and the details are very blurry.

The first time we met in person I was 16, and he was 21, and we made out and fooled around a bit but there was no sex-sex. The second time, at his place, there were too many parents and other such people around to be able to get away with anything much. My memory is trying to tell me he wasn’t that interested anyway, didn’t see the need to hurry and might’ve even liked the idea of waiting, but I’m not 100% sure now.

I on the other hand was not (and still am not) known for my patience.

So, upon seeing each other again around the time of my High School Graduation, we were messing about a bit in my bedroom and I decided it was time. Rather than jerk him off or doing a sort of strange dry humping type thing, I wanted to know what the real thing would be like. I don’t recall being particularly turned on, just sort of curious.

He sort of shrugged and mumbled something about thinking we were going to wait, then agreed and I took my panties off.

A little while later we did it again and that was also OK. Then we had a shower together and my insides were on fire and I wondered if that burning feeling would ever go away.

I always found it quite amusing that at 17 I lost it at the same age as my mom (yes, we talked about issues like this). Though to this day I wonder if her experience was more exciting. I should probably ask her next time we’re downing wine in front of the TV and expect a blushy, awkward, response in between coughs that starts with: “Why do you have to ask me stuff like this?”

There may be people reading this now, thinking “OMG that sounds boring as hell, don’t you regret it? Sure, he was your boyfriend at the time, but don’t you wish your first time was more… special?”

No, I don’t really care. My virginity wasn’t precious and it didn’t need to be guarded with my life and handed only to my knight in shining armour. And let’s be clear here, that guy was no knight of any sort.

There had to be a first time, and I’m glad it was consensual, that’s all there is to it for me. It might’ve been better if I’d been madly and passionately in love with the guy. But really, the first time is going to hurt and you’re not going to be particularly good at it. The second time it gets a little better, the third, fourth, fifth times perhaps you’ll start to see the point of it. Or not, I’m pretty sure I got over the novelty of it pretty quickly- with him, anyway. I have zero patience for regrets and what-ifs.

I think when you’re with someone compatible enough and you do find that passion, you’ll have an awesome experience anyway. And if it isn’t your (boring) first time, at least you’ll have the frame of reference necessary to know how great it was, plus you’ll know what to do. Sounds like a double win to me. 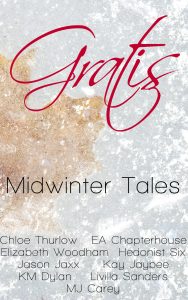 About Gratis
In what is hopefully the first of many instalments, a selection of amazing writers have bundled together some of their short stories to create an anthology which will be made available free of charge just in time for the Holidays.

Contents
Snow Falls Softly by Chloe Thurlow, In the Mood by E.A. Chapterhouse, Wicked Games by Elizabeth Woodham, Virgin by L. Moone, White (Lights Out) by Jason Jaxx, A Pair Well Met, Blinked, and The New Year Dancers by Kay Jaybee, The Future First Lady of France by KM Dylan, Irrecusable by Livilla Sanders, Glove, and A Penheligon Christmas by M.J. Carey.

The idea for this story has been months in the making, a girl in her 20s who is single for the first time in her adult life, exploring a few of the fantasies she has had to shelve while playing the squeaky-clean committed girl friend. See the blurb below:

After nearly four years with Jeff, everything fell apart. I found myself single, scared, but somehow liberated as well. Rather than stumble into another ill advised relationship, my best friend Sally helped me find focus. I would spend the next few months “finding myself” sexually. That’s how The Rebound List was born.
And -this- is how my journey begins: with a virgin. Number one on my naughty bucket list…

What (or whom) would you do to celebrate your freedom after your first serious relationship breaks down?

As this is only part one of what I’m expecting to become a four part story, the follow-up is already in progress. To stay up-to-date with its release as well as any others I have planned, why not sign up to my mailing list.

Over the years I have become aware of certain interests I have which may be unusual. Of course he internet is a great resource for seeking out like minded individuals (or discovering new things you couldn’t have dreamt up yourself)! But the fact remains that some of the things I think or dream about are not very well publicised at all. I would like to change this.This post is the first in a series where I touch upon my deepest darkest fantasies…

Virgins
It seems to be fairly common place for men to prefer a virgin as a partner. I’m assuming the main draw is that the girl would be considered innocent and pure. Even if one takes out the obvious religious aspect of this preference, it seems to be quite a common fantasy still.

But the same cannot be said for women who fantasize about having sex with a male virgin. In fact I have found comparatively little mention of this online, with most women having opposing preferences (a more experienced partner who could provide more satisfaction in the sack).

That however doesn’t change that I have a great fascination with this topic and would very much love to be a man’s first sexual partner. Unfortunately even my first time wasn’t with another virgin so I haven’t had the pleasure. – In fact I am so fascinated by it that this topic will feature heavily in the book I’m currently writing.

The appeal for me is probably mostly that I could take the dominant role in the bedroom whereas in the past I’ve always been the least experienced and shy as a result. I would be the knowledgeable mentor or teacher. I could make someone feel different (hopefully better) than he has ever felt before. Also, I have a real soft spot for men with a shy side to them.

Or as some people might think, I might be just a devious bitch who wants to corrupt the innocence of as many men as possible. But I’d never say that about myself, obviously.

I would love to connect with other women who feel this way too. If you can relate, why not leave a comment?

Did you know I also write Paranormal Romance as Lorelei Moone? Check out my website here.