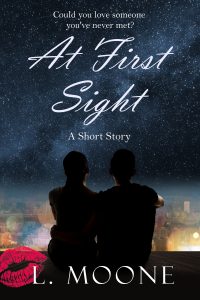 The subject of distance/online relationship fascinates me because indeed there can be quite a disconnect between how someone presents themselves vs. reality (yes, I LOVE watching Catfish on MTV for the same reason). But the driver behind the story is something which perhaps most of you don’t know about me (yet):

I have been that girl, standing in an airport arrivals area, waiting for someone to come out whom I felt I knew completely, yet had never met in person before. I was sixteen at the time and he was twenty-one. We’d “known” each other for a year and a few months. It was the scariest day of my life.

Our first meeting turned into a second six months later and that summer, after graduating from High School, I decided to move halfway across the world to be with him permanently. The relationship fell apart after a few years, but that’s OK. I was so young, it would’ve been weirder if it had worked out.

If you sign up for my newsletter, you’ll receive a FREE copy of At First Sight. Sign up here.

Did you know I also write Paranormal Romance as Lorelei Moone? Check out my website here.